Cancer Warrior and COVID Survivor: OHC Has Given Me My Life Back

Home  >  Stories of Hope  >  Cancer Warrior and COVID Survivor: OHC Has Given Me My Life Back 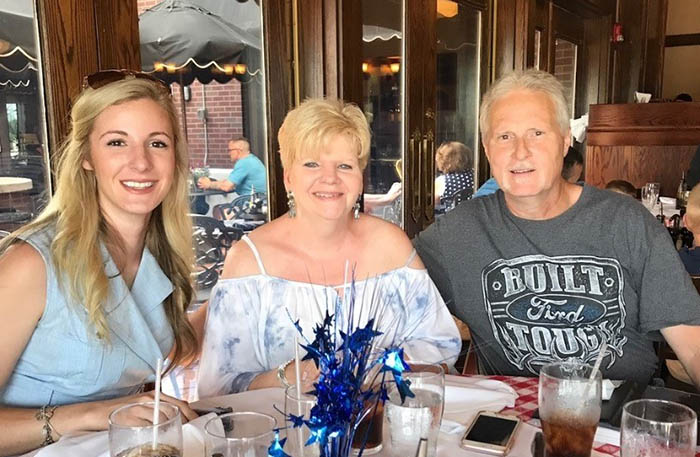 Claude Shelton likes to stay busy. Outside of his professional career, he often enjoyed managing his 25-acre Jackson Township property in Clermont County with 20 stalls in a horse boarding stable. A car enthusiast for as long as he can remember, he recently restored a 1969 Chevy Nova SS. When the side effects of chemotherapy treatment for his aggressive prostate cancer took away his vibrant spirit, Claude believed he would succumb to the cancer. Then, OHC flagged him for a promising clinical trial.

In 2011, Claude was experiencing urination issues and assumed he had an enlarged prostate. His urologist took a blood sample and told him that he had an elevated PSA, or prostate-specific antigen, a protein produced by prostate gland cells that is often elevated in men with prostate cancer. A biopsy confirmed a prostate cancer diagnosis.

Claude would receive proton therapy, a form of radiation that uses proton particles to destroy cancer cells. His PSA levels went down, and he thought his cancer was gone; however, one cell survived. One-to-one-and-a-half years after treatment, Claude’s PSA started going back up, so his urologist explored other therapies including an injection to suppress his hormones. “I felt O.K. during the treatments, but the cancer kept coming back,” said Claude. “One day, I had egg-sized nodes on my neck. The cancer had spread to my lymph nodes, so my doctor referred me to OHC.”

Claude received radiation therapy under the direction of OHC radiation oncologist Joseph N. Shaughnessy, MD. OHC’s Mark E. Johns, MD, a medical oncologist and hematologist, then treated Claude with chemotherapy. Eventually, the chemotherapy side effects weakened Claude so much that he retired from his work. “I felt terrible on the chemo and laid on the couch for a year,” said Claude. “Sitting in front of the TV was driving me nuts, and it was so hard to look out the window on a pretty day and know I couldn’t work outside.”

Claude’s wife, Lisa, and a few of the couple’s friends helped to manage the property. Lisa and their daughter, Kaylynn, a nurse, tried to remain optimistic for Claude.

“The chemo had aged me,” described Claude. “I was done with it. I told Lisa I was sorry, but I couldn’t go on like this anymore.”

Lisa, who calls Claude ‘Tim’, described how difficult it was to see him deteriorating. “Tim had always been active and hated to sit still. He always worried that he couldn’t help me with the farm. It was emotionally and physically hard on both of us. I knew he was trying hard to beat cancer, and it pained me to hear him say he couldn’t go on. We’ve been married 34 years. He’s my best friend.”

Dr. Johns’ news about a promising treatment trial for Claude could not have come at a better time. Dr. Johns told Claude that he qualified for a Phase 1 trial for a novel approach to treating some blood cancers and solid tumors called AMG 509, a BiTE technology. OHC is one of only 15 sites in the world, and the only in the region, to offer this trial.

“I didn’t hesitate to join the trial,” said Claude. “The only other option was to let cancer take me.”

Because this trial initially has an inpatient component, OHC cellular therapy expert James H. Essell, MD, supervised Claude’s weekly treatment infusions which began last December. Claude will continue to receive treatment for three-and-a-half years. He has had an excellent response to the last few cycles. His PSA level has dropped significantly and his nodes are shrinking.

“Everyone at OHC has been fantastic,” said Claude. “Alessa, my research nurse, did an excellent job providing detailed information about the trial and possible side effects. The doctors are extremely knowledgeable and they closely monitor all of my medications to make sure they don’t interact with the BiTE therapy.”

A recent battle with COVID nearly made Claude ineligible to continue receiving his life-saving treatment. “At the end of May, I was diagnosed with COVID and was on oxygen in the hospital,” said Claude. “I missed one of my BiTE treatments. If you miss two, you can no longer participate in the trial. Dr. Essell pushed for my recovery. I was sent home with oxygen on a Monday and received my BiTE treatment the next day.”

Still building up his strength from COVID recovery, Claude was only recently able to join his wife in cleaning the horse stalls. He now receives outpatient weekly treatments. “I’m fortunate to have family and friends supporting me,” said Claude. “My life was at an end and OHC gave me my life back. I tell anyone facing cancer to keep the faith, don’t give up, and go to the doctors at OHC.”