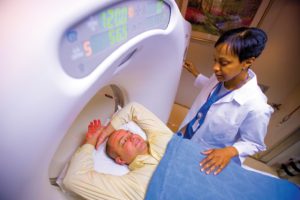 Kaposi sarcoma is a cancer that causes lesions (abnormal tissue) to grow in the skin, the mucous membranes lining the mouth, nose and throat, lymph nodes or other organs. The lesions are usually purple and are made of cancer cells, new blood vessels, red blood cells, and white blood cells. Kaposi sarcoma is different from other cancers in that lesions may begin in more than one place in the body at the same time.

Over time, lesions may form in other parts of the body, such as the stomach, intestines, or lymph nodes. The lesions usually don’t cause any symptoms, but may grow in size and number over a period of 10 years or more. Pressure from the lesions may block the flow of lymph and blood in the legs and cause painful swelling. Lesions in the digestive tract may cause gastrointestinal bleeding.

Sarcoma is often referred to as the “forgotten cancer,” most likely because it comprises less than one percent of