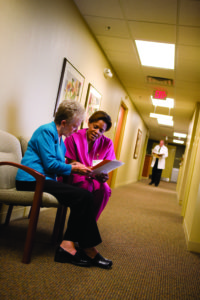 Laryngeal cancer is a disease in which malignant (cancer) cells form in the tissues of the larynx. The larynx is a part of the throat, between the base of the tongue and the trachea. The larynx contains the vocal cords, which vibrate and make sound when air is directed against them. The sound echoes through the pharynx, mouth, and nose to make a person’s voice. Most laryngeal cancers form in squamous cells, the thin, flaT-cells lining the inside of the larynx. Laryngeal cancer is a type of head and neck cancer.

These and other signs and symptoms may be caused by laryngeal cancer or by other conditions. Check with your doctor if you have any of the following:

Your OHC doctor will help you determine the best care plan for you. There are three types of standard treatment:

Even if the doctor removes all the cancer that can be seen at the time of the surgery, some patients may be given chemotherapy or radiation therapy after surgery to kill any cancer cells that are left. Treatment given after the surgery, to lower the risk that the cancer will come back, is called adjuvant therapy.

There are new types of treatments being tested in clinical trials including: