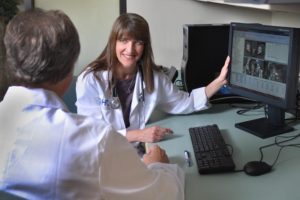 There are different types of urethral cancer that begin in cells that line the urethra. These cancers are named for the types of cells that become malignant (cancer):

Urethral cancer can metastasize (spread) quickly to tissues around the urethra and is often found in nearby lymph nodes by the time it is diagnosed.

These and other signs and symptoms may be caused by urethral cancer or by other conditions. There may be no signs or symptoms in the early stages. Check with your doctor if you have any of the following:

If the bladder is removed, the surgeon will make a new way for urine to be stored and passed from the body. The surgeon may use part of the small intestine to make a tube that passes urine through an opening (stoma). This is called an ostomy or urostomy. If a patient has an ostomy, a disposable bag to collect urine is worn under clothing. The surgeon may also use part of the small intestine to make a new storage pouch (continent reservoir) inside the body where the urine can collect. A tube (catheter) is then used to drain the urine through a stoma.

Even if the doctor removes all the cancer that can be seen at the time of the surgery, some patients may be given chemotherapy or radiation therapy after surgery to kill any cancer cells that are left. Treatment given after the surgery, to lower the risk that the cancer will come back, is called adjuvant therapy.