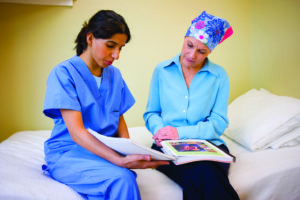 Vulvar Cancer is a rare disease in which malignant (cancer) cells form in the tissues of the vulva (in the external genitalia of women). Vulvar cancer most often affects the outer vaginal lips. Less often, cancer affects the inner vaginal lips, clitoris, or vaginal glands.

Vulvar cancer usually forms slowly over a number of years. Abnormal cells can grow on the surface of the vulvar skin for a long time. This condition is called vulvar intraepithelial neoplasia (VIN). Because it is possible for VIN to become vulvar cancer, it is very important to get treatment.

Please click here to view and print a chart on common symptoms of gynecologic cancers.

There are three primary types of treatment used for vulvar cancer. Your OHC doctor will help you determine the best care plan for you.