Listening to Your Body Can Save Your Life: An OHC Patient’s Colorectal Cancer and Survival

Home  >  Blogs  >  Patient Stories  >  Listening to Your Body Can Save Your Life: An OHC Patient’s Colorectal Cancer and Survival 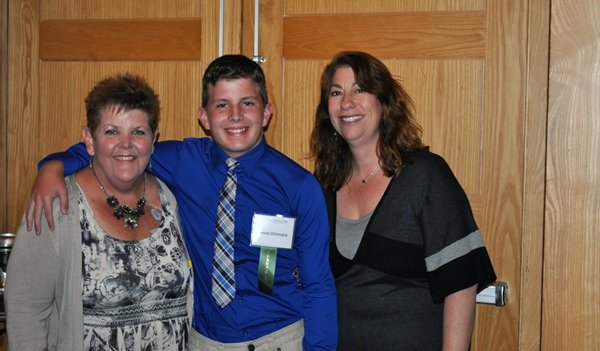 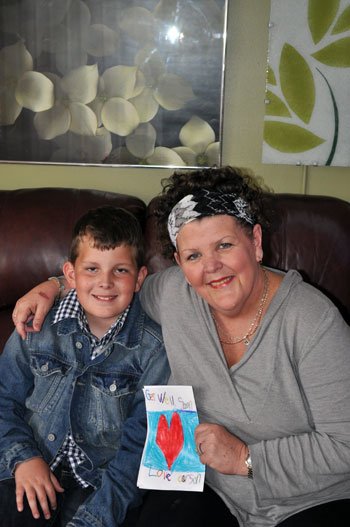 Sandy Ditmore and her son Jessie with one of the letters from The Sandy Strong Project that he initiated.

No one knows our bodies better than ourselves – so when something is wrong, it doesn’t take long to notice. Unfortunately, when we are busy we sometimes ignore or downplay the signs to keep up with daily life. This was the case with OHC patient Sandy Ditmore, who five years ago was diagnosed with stage 4 colorectal cancer.

Sandy was a healthy, active, in her early 40s, single mom raising five children. She spent her days working as a vault teller and her evenings were busy taking the kids to activities, doing homework, and making dinner. She remembers experiencing minor symptoms from time to time over a five-year period, like pressure in her rectum and a small amount of blood in her stool, but chose not check things out even though she had access to medical care and excellent health insurance. She didn’t have time, remembers Sandy, as these “symptoms” were not keeping her from her hectic routine and she convinced herself it was probably due to hemorrhoids.

Then came the eventful drive home. Having just left work, Sandy suddenly felt horrible and knew she needed to reach a restroom. Upon arriving home, she started passing large amounts of blood from her rectum. Alarmed and scared, she knew something was seriously wrong. She sought immediate attention and after a colonoscopy was diagnosed with five precancerous polyps. Due to their size, Sandy underwent surgery to have part of her colon removed along with the polyps. After her recovery, Sandy was instructed by her doctors to have a yearly colonoscopy, which is recommended for individuals who have a history of polyps. However, Sandy went back to being a busy mom and didn’t follow this advice.

Three years later, Sandy unfortunately noted blood in her stool and decided to take action this time. A colonoscopy revealed she had stage 4 colorectal cancer and a CAT scan and liver biopsy showed the cancer had spread. Sandy’s new family became OHC. Now-retired medical oncologist Dr. John Bismayer helped Sandy through some difficult times. Dr. Mark Johns now directs her care. Sandy shares that she has received close to 50 rounds of chemotherapy and has participated in three clinical trials, besides other surgical interventions. She is still fighting the battle.

When you listen to Sandy talk, she is strong in her beliefs and says she is here to help educate others so they do not repeat her mistakes. “The biggest lesson I’ve learned throughout this whole experience is that you need to be aware and listen to your body. If you see blood in the toilet or experience uncommon abdominal pain, address it with your doctor so that you don’t end up in my situation. Not all symptoms result in a cancer diagnosis, but you have to be your own advocate,” notes Sandy.

Another piece of advice is to bring a friend or family member with you for your medical appointments so they can take notes and help you remember what is being said.

“It’s important to take notes and act upon even the slightest symptoms because it means something is going on in your gut. Even if it’s not cancer, it needs to be addressed immediately,” said Sandy.

She remains optimistic about her future. What drives Sandy? Well, her family has grown to 10 children with a grandchild on the way. She credits her positive attitude, determination, and especially her children, as being the key to her survival.

Determination runs in the family as her now 13-year-old son Jessie started an initiative in 2013 in Forest Hills School system called The Sandy Strong Project. Students created and sent nearly 2,000 pictures and letters to oncology offices, the Ronald McDonald House, and the Alzheimer’s Association to brighten a patient’s day in honor of his mom and her strength during her battle with cancer. He was honored for his work with a letter from former President Obama and with a 2016 Unsung Hero Award from Cancer Family Care. Sandy was a recipient of the same award and was recognized for her strength, positive attitude, and the impact she has on other patients and OHC staff. “Sandy never gives up,” notes OHC nurse Judi Houchens, who nominated Sandy and her son Jesse. They are both an inspiration to so many people.

“I have so much to look forward to in my life that I can’t let my cancer stand in my way,” said Sandy. “I’m determined to fight this so that I can see my children get married and have babies.”

OHC wants to remind readers that these symptoms should be evaluated by a health care provider:

Many of these symptoms can be caused by other conditions, but it is important to see your doctor so the cause can be found and treated.

To learn more about reducing your risk of colorectal cancer or OHC’s cancer treatments, please browse our website and download our patient newsletters. Or call us toll-free at 1-844-424-6673.