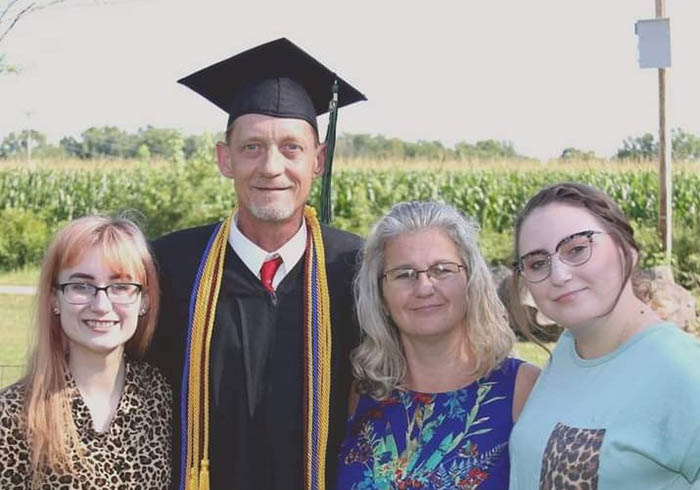 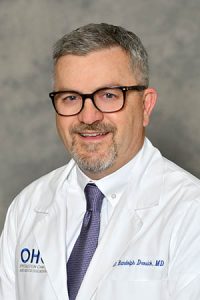 Mark Williams personifies hard work. He has tirelessly worked in a machine shop for as long as he can remember. To earn extra money on the side, he regularly hangs drywall or installs carpet. In recent years, he decided to pursue an associate degree in applied science. So, when he suffered from back pain, he attributed it to strain or injury from work. When his doctor treated him for arthritis and he had no relief, he knew he had to find some answers.

“My wife, Tammy, and I were thinking I had a herniated disk,” said Mark. “In 2015, we scheduled an appointment with an orthopedic specialist who gave me a pain blocker and ordered an MRI and biopsy.” Test results revealed that Mark had lung cancer that had metastasized, or spread, to his bones and spinal area causing his pain. He received a referral to the cancer specialists at OHC.

Mark had an appointment relatively quickly with Peter G. Ruehlman, MD, an OHC medical oncologist. Dr. Ruehlman said Mark had stage 4 non-small cell lung cancer (NSCLC), the most common type of lung cancer. He would have six-to-12 months to live without treatment. “I had children in high school and I wanted to see them graduate, so I began treatment,” said Mark.

Dr. Ruehlman started Mark on a chemotherapy called carboplatin. “It was terrible,” said Mark. “I was nauseated and vomiting and had no appetite,” said Mark. “I went from 170 pounds to 116. For the first time in my life, I couldn’t work.”

Dr. Ruehlman also ordered genetic testing on Mark’s tumor to determine if he would respond better to another treatment. Results indicated that Mark would benefit from Opdivo, an immunotherapy for adults with advanced NSCLC who were previously treated with a specific type of chemotherapy. Soon, OHC medical oncologist and hematologist, D. Randolph “Randy” Drosick, MD, would step in to care for Mark after Dr. Ruehlman retired.

“Immunotherapies help the body’s immune system identify and attack cancer cells,” said Dr. Drosick. “They are less toxic than chemotherapy and typically provide the patient with fewer side effects and a better quality of life.”

Mark comes to OHC every two weeks for his Opdivo infusions and will continue to for the rest of his life. Every six months, he has scans that have shown that he is stable. Mark has nothing but positive things to say about his OHC care team.

“I respect the care I’ve been given from everyone at OHC,” said Mark. “My time with Dr. Drosick has been a godsend, and Aimee Brown (former OHC advanced practice provider and now OHC Director of Clinical Services) was my life support. She gave me her cell number so I could call her the day after my scans to get results. She was with me when I got my 100th and 150th treatments, and nurse Jayne Fite has been my lifeline when I go in for treatments too.”

We are not sure what caused Mark’s cancer. His father died from lung cancer and he is a former smoker who could have been exposed to environmental toxins at work. What we do know is that Mark is thriving in survivorship. Last year, he and Tammy, residents of Bethel, Ohio, purchased an RV and they plan to travel all over the U.S. “I respect life a lot more,” Mark said. “Every minute of it.”

This Lung Cancer Awareness Month is an opportune time to learn more about lung cancer prevention, screening, and signs and symptoms. For more information or to request a second opinion with one of OHC’s cancer specialists, call 1-888-649-4800 or visit ohcare.com.