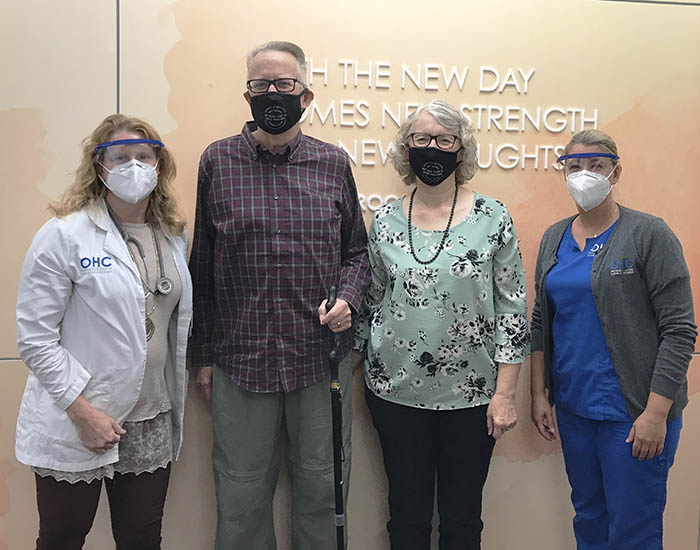 Prostate cancer is the second most common cancer among men. The good news is that approximately 90 percent of prostate cancers are diagnosed in early stages and the survival rate at this stage is nearly 100 percent. But for the patients who are diagnosed at a later stage, treatment options and survival rates are not as promising, especially when there is a family history of a gene mutation.

For men diagnosed with metastatic prostate cancer, about 5 – 10 percent of men have a hereditary factor, including the BRCA 1 and BRCA 2 gene mutations. When a man tests positive for a BRCA gene mutation, it increases his chance of developing a more aggressive form of prostate cancer, one that is more difficult to treat.

Recent advancements have resulted in new treatment options that specifically work against BRCA gene mutations. These advancements are being evaluated in prostate clinical trials with the hope of improving survival rates and reducing side effects for men with advanced disease. One of these treatments is a drug called Rucaparib and it’s available from the prostate cancer experts at OHC.

“Rucaparib is an inhibitor drug that has shown positive results treating BRCA gene mutated ovarian cancer,” said OHC’s Suzanne M. Partridge, MD, medical oncologist, hematologist and principal investigator of the clinical trial. “Now we’re evaluating it in a clinical trial at OHC to see if it can be as effective for men with metastatic prostate cancer who test positive for a BRCA gene mutation.”

Harrison resident Fred Green is one of those men and the first locally to enroll in the OHC trial.

“What I thought was a pulled muscle was stage 4 prostate cancer that had spread to my bones,” Fred explained. “Since I had BRCA 1 in my family, Dr. Partridge recommended I have genetic testing at OHC and I agreed.”

Fred tested positive for BRCA 1, which made him eligible for the clinical trial.

“I was on a drug that worked, but only for about a year. Then Dr. Partridge told me about this new drug being evaluated in a clinical trial at OHC for men with my condition. I decided to try it because one, I want to live, two, I see it as an opportunity to educate the medical field so they can help others in the same situation, and three, I want to spend more time with my 16 grandchildren,” he said.

“We are so pleased to be offering this trial because it gives all patients like Mr. Green another option to control his advanced prostate disease, reduce the pain in his bones and bring a new sense of hope for remission,” Dr. Partridge added.

OHC’s cancer experts continue to seek out innovative treatments for patients like Fred with advanced disease and make them available to all patients in the region. Learn more about prostate cancer and clinical trials at OHC, or request a second opinion, at ohcare.com or call 1-888-649-4800.