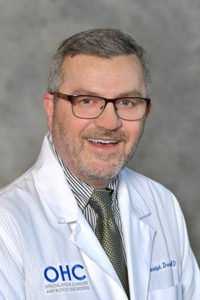 John Boys, an industrial electrician approaching 60, had no plans to go to the doctor until his employer offered incentives for getting a physical during the spring of 2019. A casual discussion about a knot he had in his abdomen led to a cancer diagnosis and a life-saving survivorship journey with the cancer experts at OHC.

“I assumed the knot in my abdomen was a hiatal hernia,” said John. “The doctor performing my physical exam ordered a CT scan and called me the next day at work with the results. I had cancer throughout my entire lymph system, liver, spleen, pelvis, femur, and spine.”

“John had stage four lymphoma,” said Dr. Drosick. “I prescribed R-CHOP, a combination of five drugs, including chemotherapy, that work together to target and kill cancer cells.”

“Dr. Drosick is the most positive doctor,” said John. “He related to me and made me feel like he was going to take care of me.”

Following three rounds of therapy, John had a clear PET scan. But, his relief was short-lived. That fall, he began to feel weak and tired. A scan revealed that the cancer had recurred and John had fluid in his abdomen. Dr. Drosick referred John to his colleague James H. Essell, MD, an OHC medical oncologist, hematologist, cellular therapy specialist, and leading authority on blood and marrow stem cell transplants. John’s wife, who had a leadership role in a local healthcare system and a lot of oncology experience, told her beloved husband that Dr. Essell was one of the best.

After performing a bone marrow biopsy on John, Dr. Essell recommended that he have an autologous stem cell transplant, or a transplant using John’s own stem cells. On February 11, 2020, John received the transplant and stayed in the hospital for a few weeks to recover. Transplant patients are severely immunocompromised and require close monitoring.

After recovering, John returned to work that May. “I’m a walking miracle,” said John. “OHC saved my life. You come to them at your lowest stage of life and they say, ‘we’re going to take care of you.’ OHC’s on the forefront of innovation and everyone always had concern for me.”

John, who retired a little over a year ago, admits that he suffers from some memory issues and is not quite as strong as he used to be, but it hasn’t stopped him from making plans. He is focused on spending more time with his six grandchildren. Terry, who John refers to as his rock, is preparing for retirement. The couple enjoys travel and hopes to purchase a camper to visit national parks. They have an Alaskan cruise and rail trip later this summer.

June is National Cancer Survivor Month. OHC celebrates all survivors, supports those undergoing cancer treatment, and honors those who valiantly battled the disease and are no longer with us. Our cancer experts strongly recommend annual physicals and remind adults to be mindful of cancer screening recommendations, which can be found here: https://ohcare.com/service/cancer-screenings/. In most cases, the earlier cancer is discovered the better the outcomes. To schedule an appointment with an OHC cancer doctor or request a second opinion, call 1-888-649-4800 or visit ohcare.com.

OHC (Oncology Hematology Care) has been fighting cancer on the front lines for more than 35 years. We are the region’s leading experts in the treatment of nearly every form of adult cancer and complex blood disorder. OHC cancer experts include medical oncologists, hematologists, blood and marrow transplant specialists, cellular therapy specialists, radiation oncologists, gynecologic oncologists, and breast surgical oncologists. OHC continues to bring leading-edge treatment options through its nationally recognized cancer research and clinical trials program. OHC is the first, most experienced, and only certified independent adult cancer practice in the region to offer the revolutionary immunotherapy treatment, CAR-T, for adults, ushering in a new frontier in the fight against cancer. OHC is certified by the American Society of Clinical Oncology in the Quality Oncology Practice Initiative Certification Program and is one of only a select few cancer practices nationally to be accepted to participate in the Oncology Care Model, part of The Center for Medicare & Medicaid Innovation. At its heart, our approach to cancer care is simple — to surround you with everything you need so you can focus on what matters most: beating cancer. For more information about OHC, or a second opinion, call 1-888-649-4800 or visit ohcare.com.