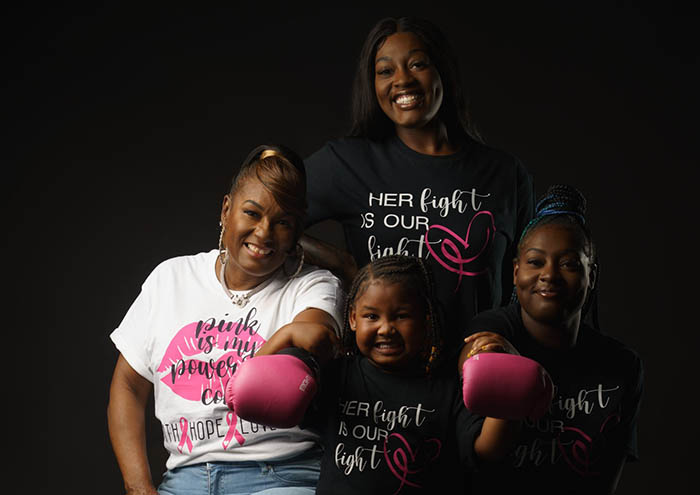 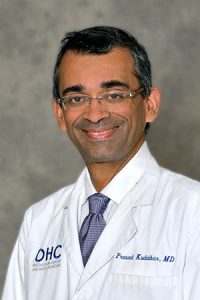 How many of us have felt a suspicious lump or discovered a new lesion or pain and immediately had a sinking feeling that something was wrong? We might try to convince ourselves that it will go away, but our bodies may be alerting us that something isn’t right. Jacqueline Evans has been there, and the lump she discovered turned out to be breast cancer. Her faith, positive attitude, and the connection she developed with her OHC doctor helped her to heal and recreate herself.

In December 2018, Jacqueline felt a lump on the edge of her breast near her arm and passed it off as a reaction to her detergent or deodorant but eventually felt it was best to schedule a mammogram. Jacqueline saw Mercy Health breast surgeon, Dr. Jacquelyn Palmer, who performed a biopsy on the suspicious lump and diagnosed Jacqueline with breast cancer. She quickly referred her to OHC medical oncologist and hematologist, Prasad R. Kudalkar, MD.

“Your first impression is a big impression,” said Jacqueline as she recalled meeting Dr. Kudalkar. “During my first visit, he asked me about what I was expecting from his care, and I said, ‘to be healed.’ Dr. Kudalkar said, ‘O.K.’ and never had a doubt.”

“Jacqueline had stage 2 triple-negative breast cancer, but I was optimistic about her prognosis as she was in good health and exercised,” said Dr. Kudalkar. “I knew she could tolerate her treatment.” Triple-negative means that the breast cancer does not have any of the receptors—the hormone estrogen, the hormone progesterone, or the protein human epidermal growth factor (HER2)—commonly found in breast cancer. “Her tumor was 22 millimeters in size, so I recommended chemotherapy to shrink the mass prior to surgery,” said Dr. Kudalkar.

Jacqueline, who recently turned 60, resides in Fairfield with her husband, twin daughters, and mother. In February 2019, she began IV (intravenous) chemotherapy at OHC’s Fairfield office. That July, she had surgery, a partial mastectomy, to remove what remained of the cancer, which was followed by a six-month course of oral chemotherapy.

Interestingly, Jacqueline does have a strong history of breast cancer on both the maternal and paternal sides of her family. Making sure there was not a genetic component, Jacqueline obtained genetic testing through OHC’s Genetic Risk Evaluation and Testing (GREAT) program which revealed no genetic mutation for breast cancer.

An eternal optimist, Jacqueline only shared her diagnosis with those who uplifted or encouraged her. “You can’t allow anyone in your circle to speak negatively to you,” advised Jacqueline. “It can take a community to care for you and I was surrounded by so many who helped me when I was down.” Dr. Kudalkar was Jacqueline’s biggest cheerleader. “He made me feel like I was a person and always told me that I could get through this—that my care team would handle all of my concerns,” said Jacqueline. “He’s so mild-mannered. I don’t think he can get upset!”

It might have been Jacqueline’s chocolate turtles that kept Dr. Kudalkar in good spirits. Jacqueline’s way of regularly showing her appreciation was giving him those delectable clusters of pecans and caramel dipped in chocolate, a sweet treat he had never tasted.

Following surgery, all of Jacqueline’s annual mammograms have been clear, including her most recent screening in April. “I cried happy tears,” said Jacqueline. She will continue to see Dr. Kudalkar every three months.

Jacqueline credits OHC with giving her an inspirational journey, and it hasn’t ended yet. “God has allowed me to turn my ash into beauty, and I’ve been reinvented,” said Jacqueline. “I’m an advocate now.” She is in the process of starting a nonprofit organization, Pink Is My Power Color. With a focus on supporting African American women with breast cancer, Jacqueline hopes to provide resources to all women and men willing to share their breast cancer journey. “I hope to empower them with information on nutrition, fitness, and counseling,” said Jacqueline. “It takes all of that to make you feel whole again. I’m creating a lot of awareness through word of mouth and people are seeing my vision and getting attached.”

OHC’s team of leading cancer specialists reminds all women to perform monthly breast self-exams to become familiar with how their breasts look and feel and report anything unusual to their doctor. For more information on breast cancer screening, detection, and diagnosis, or to request a second opinion, call 1-888-649-4800 or visit ohcare.com.