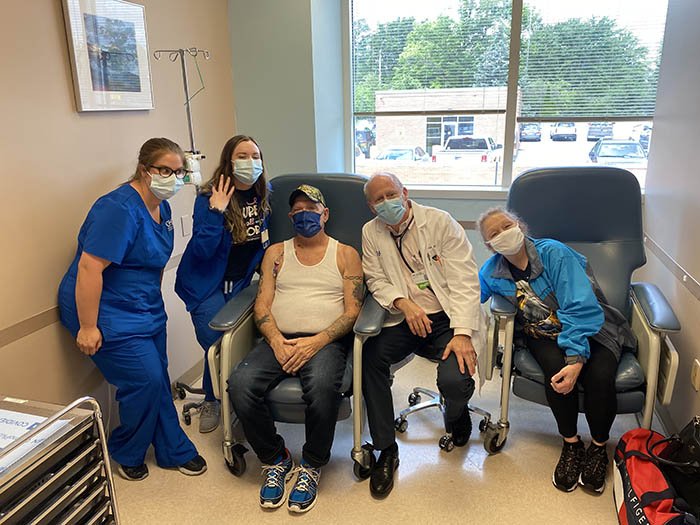 Just over one year ago, OHC’s cancer experts were among the select investigators who were first in the world to evaluate a groundbreaking therapy for B-cell non-Hodgkin lymphoma (B-NHL). John Hornsby of Latonia, Kentucky, enrolled in the Caribou Biosciences ANTLER clinical trial at OHC and received CB-010, a revolutionary immunotherapy called chimeric antigen receptor T-cell therapy (CAR-T) on the morning of June 10, 2021. Today, Mr. Hornsby has no evidence of cancer.

The journey to this milestone day was an uphill battle for this ex-Marine and welding foreman. While preparing to share John’s story, Tammy, John’s beloved wife of over 45 years, looked through the pages of her journal and had to turn back to 2013. “In April of 2013, I noted that we were planning for retirement,” said Tammy. “On May 3rd of that year, I journaled that John was diagnosed with cancer and wrote, ‘God’s strength is made clear in our weakness. Life is too short to sweat the small stuff.’” The Hornsbys’ unwavering faith pulled them through their journey.

John began his first of several chemotherapy regimens at St. Elizabeth Cancer Center. “I think I had been through every chemo known to man,” said Mr. Hornsby. “We were like newborn babies learning along the way,” he added. In addition to enduring chemotherapy treatments, John dealt with pneumonia, shingles, and a few bouts of C. diff, a bacterial infection causing severe diarrhea and inflammation of the colon. “I was in awe at everything the world was throwing at John,” said Tammy. “From serving as a Marine in Vietnam to a cancer diagnosis and all of this. God wasn’t done with him yet.”

Despite multiple chemotherapy treatments, John was making little progress. He was running out of options and hope. In 2019, his oncologist at St. Elizabeth, Dr. Dan Flora, referred him to OHC’s James H. Essell, MD, a medical oncologist, hematologist, blood and marrow transplant specialist, and cellular therapy expert, as OHC had access to the latest treatments for B-NHL. “Dr. Flora said, ‘They’re doing miracles at OHC,’ and I said, ‘Well, I need a miracle,’” said John.

After trying a new oral therapy and still seeing little progress, Dr. Essell introduced John and Tammy to the ANTLER trial using CB-010 in mid-2021. “Dr. Essell said he had another trick in his bag,” said John. “I thought there were no other treatments, so I stepped up to do the study because I wanted to do anything I could to live. I could take this medicine for science and all the other people going through this. God used Dr. Essell’s hands to give me another chance.”

Four years ago, OHC’s cancer experts represented the first adult cancer group in the region to introduce CAR-T for adults with aggressive blood cancers. Autologous CAR-T uses a patient’s own T-cells that are genetically engineered to prepare the CAR-T cell therapy which is then given back to the same patient. T-cells are an important part of the immune system that can kill cancer cells in the body. CB-010 is a new type of allogeneic CAR-T for multiple subtypes of B-NHL. Allogeneic means that the T-cells are derived from a healthy donor rather than taken from the patient.

“Access to this ‘off-the-shelf’ product is a game-changer for many patients,” said Dr. Essell, principal investigator of the ANTLER study. “It reduces the waiting time for the patient to receive the treatment and prevents the T-cell exhaustion that we sometimes see in T-cells taken from a patient who has received years of chemotherapy. This research is significant as we move away from traditional treatments like chemotherapy with harsh side effects and towards using the power of the patient’s immune system to fight their own cancer.”

Since receiving the treatment, John reports that he feels great and his strength is back. He continues to follow up with Dr. Essell every three months. “I’m not giving up,” said John. “Besides passing out when I see needles, my checkups have been great, and I would have no other people taking care of me. OHC’s like a family. I’ve never met people like this. They’re the greatest.”

Caribou Biosciences announced the promising results of the phase 1 ANTLER trial at the European Hematology Association (EHA) 2022 Hybrid Congress, which was held in Vienna, Austria, June 9-17, 2022. “The preliminary safety and efficacy results are very promising,” said Dr. Essell. “All six patients receiving the single initial dose level of CB-010 had a 100 percent complete response. The treatment was generally well-tolerated, and I couldn’t be more encouraged with Mr. Hornsby’s progress.” The ANTLER trial is now enrolling patients at dose level two for CB-010.

OHC’s nationally-recognized cancer research and clinical trials program remains at the forefront of the newest, most promising cancer treatments. Soon, OHC will expand the use of CAR-T for other B-cell malignancies and solid tumors, including breast and lung cancer. To schedule an appointment with one of our cancer experts or for more information on CAR T-cell therapy and the clinical trials offered at OHC or to request a second opinion, call 1-888-649-4800 or visit ohcare.com.

Top picture: John and Tammy Hornsby along with Dr. Essell and team are filled with hope on the day of the CB-010 infusion.