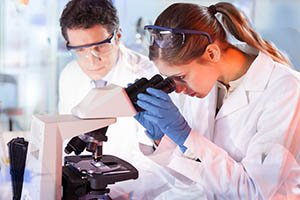 Some biological therapies for cancer stimulate the body’s immune system to act against cancer cells. These types of biological therapy, which are sometimes referred to collectively as immunotherapy, do not target cancer cells directly. OHC doctors use different types of immunotherapy, some in the form of a pill, some administered through an IV, and some in the form of a vaccine.

OHC is proud to be at the forefront in the use of immunotherapy, one of the newest approaches to treating cancer. Immunotherapy is a type of treatment that uses the body’s own immune system to fight cancer. The therapy mainly consists of stimulating the immune system to help it do its job more effectively. It can also involve adding things to your immune system, such as man-made proteins.

One of the newest, most exciting immunotherapies is chimeric antigen receptor T-cell therapy (CAR-T), and the cancer experts at OHC are the only adult cancer doctors in the region to offer it to adults with blood cancers. CAR-T is a type of immunotherapy that stimulates the body’s immune system to fight cancer. It uses genetically engineered immune T-cells to recognize specific proteins on tumor cells. CAR-T has shown dramatic results in patients who had few options and little hope, and many are now in remission.

Other biological therapies target cancer cells directly. They are referred to as targeted therapies. Targeted therapy is a cancer treatment that uses drugs, but is different from traditional chemotherapy, which is not specific to the cancer cells.

For patients with cancer, biological therapies may also be used to treat the side effects of other cancer treatments. Although many forms of biological therapy have been approved by the U.S. Food and Drug Administration (FDA), others are still being evaluated and are available to cancer patients primarily through clinical trials.

For more information about biological therapies, clinical trials or to request a second opinion, please click Request An Appointment or call 1-800-710-4674.