The Most Common Cancers: #4 Colorectal 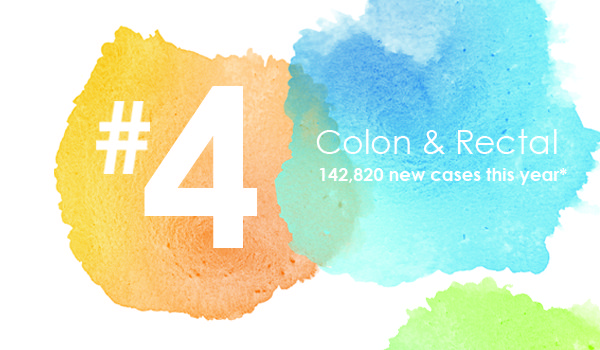 Colon cancer, also known as colorectal cancer, is most often found in people that are age 50 and older. It impacts all racial and ethnic groups, as well as both sexes. By the end of 2013, there will be 142,820 new cases diagnosed, making it the fourth most common cancer according to the National Cancer Institute. Among all cancers it is the second leading cause of death.

Colorectal cancer typically begins with abnormal growths along the inner wall of the colon or rectum. These growths, called polyps, are benign, but some can begin to grow uncontrollably, producing colon cancer.

Having polyps is one of the risk factors for colorectal cancer. While the exact causes are not known, there are other risk factors that lead to a higher likelihood of developing the disease. It can be both sporadic or familial in occurrence. 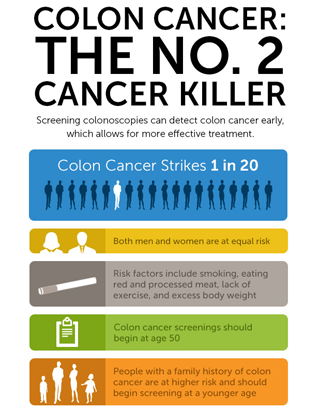 The first is your age. If you are 50 or older, your risk for developing colorectal cancer is increased. In fact, of all those diagnosed with this disease, more than 90 percent are past the age of 50.

Your risk also increases if your parents, siblings, or children have had colon cancer. Having ulcerative colitis or Crohn’s Disease can also put you at higher risk.

Studies are showing that a diet high in fat and low in calcium is yet another risk factor, along with smoking, and whether or not you’ve suffered from colon cancer before. Obesity is associated with increased risk of colon cancer.

Finally, there are some genetic disorders, such as Hereditary Nonpolyposis colon cancer or Familial Adenomatous Polyposis, that can lead to colon cancer as well.

The symptoms for the diseases are common ones that most of us experience with non-life-threatening ailments. They include:

•    Having diarrhea or constipation
•    Feeling that your bowel does not empty completely
•    Finding blood (either bright red or very dark) in your stool
•    Finding your stools are narrower than usual
•    Frequently having gas pains or cramps, or feeling full or bloated
•    Losing weight with no known reason
•    Feeling very tired all the time
•    Having nausea or vomiting

If you have symptoms that persist, you should see your doctor about getting a colorectal screening. As with other cancers, early detection is the key for success. With regular screening, this disease can be detected early, when treatment is the most effective.

People over 50, or those who are at high risk, should see their doctor regularly for these tests to determine if they have polyps.

The Fecal Occult Blood Test is one of the screens used. It looks for traces of blood in stool, caused by bleeding polyps. Another test involves a physician using a sigmoidoscope to perform a sigmoidoscopy, which checks inside the rectum or lower colon for polyps. If they’re found, the doctor can remove them with a polypectomy.

Your doctor might also prescribe a colonoscopy, an examination of your colon with a lighted tube, a colonscope, through which the doctor can look. A Digital Rectal Exam might also be used. It involves inserting a gloved, lubricated finger into your rectum to check for abnormalities.

A more involved test is the Double-Contrast Barium Enema, where a barium solution and air is pumped into your rectum. This allows polyps or tumors to show up on X-rays.

If you have test results that suggest cancer, a biopsy will be performed and the removed tissue sample will be checked for cancer. If the biopsy is positive for cancer, then your doctor will prescribe treatment.

The type of treatment depends on whether the tumor is in the colon or rectum, and the stage of the disease. Treatment begins with surgery to remove the tumor. For those with colon cancer, a colostomy (an alternative channel for feces to leave the body) is seldom needed. About 1 in 8 rectal cancer patients will require one.

Post-surgical treatments include chemotherapy, biological therapy, radiation therapy, or a combination of these treatments. If your cancer was caught early, no further therapies may be needed.