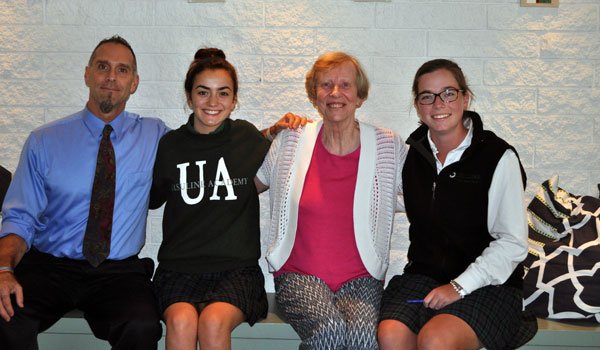 When Sister Mary Ann Jansen began feeling extraordinarily tired in March 2014, she chalked it up to her demanding schedule. As Director of Community Ministries at Ursuline Academy of Cincinnati, Sr. Jansen accompanied students on retreats and often worked late, as well. “I was just thinking I was getting old,” said the spirited woman in her late 60s, “because my old energy wasn’t quite there.”

Because she was taking prescription heart medication, Sr. Jansen’s search for the cause of her weariness began with her cardiologist. “I went back and forth with my cardiologist, adjusting the dosage, and finally two nurses — my niece and the school nurse — suggested I get a blood test in case it was anemia.”

When the blood test results came back, “the cardiologist said he was sending me to another doctor and I didn’t even catch on then,” she said about her cancer diagnosis. It was only after arriving at the appointment that Sr. Jansen discovered she had acute myeloid leukemia (AML). “That morning I was supposed to go on a retreat with my junior girls, and I went to the doctor expecting to get some sort of medicine. Instead, he sent me straight to the hospital,” she said.

AML is an aggressive, often fatal blood cancer. In Sr. Jansen’s case, the disease also had a mutation called an FLT3-internal tandem duplication (ITD), found in approximately 25 percent of all AML patients. This makes the disease even more aggressive, with a higher likelihood of relapse after remission.

Because of the ITD, medical professionals recommended a bone marrow transplant. That’s when Dr. James Essell, a blood cancer specialist at OHC, took over her care. “I was very blessed, because while I had another round of chemotherapy, they were able to find four bone marrow donors within three weeks — all a perfect match,” Sr. Jansen said.

In July, Dr. Essell performed a bone marrow transplant at the state of the art Blood Cancer Center at The Jewish Hospital-Mercy Health, which is physician-led by the OHC blood cancer specialists. The center is the Tri-state leader in stem cell and bone marrow transplants. Sr. Jansen was home in just two weeks.

This was Sr. Jansen’s second bout with cancer. The first, over 20 years earlier, was a battle with breast cancer. “I remember sitting in my room thinking, ‘Well, it’s leukemia. I’m ready to go, whatever it is, and I’ll just remain faithful to it,’” Sr. Jansen said. “It was a gift in its own way. The people I met, the exchanges I had, the deepening of my own faith — the emotional and personal exchanges — held me.

At OHC, she was helped to understand her cancer in a broader context, with support, structure, and clarity through education. “My experience is, in dealing with cancer, you come to a point where you have to say, ‘I can’t do this by myself. I can’t keep living as the person I have known before cancer, because physically, emotionally, and spiritually, I can’t do it on my own.’”

“To suddenly be told I had leukemia, to be told I had to do chemo, again, to be told ‘we don’t think the chemo is going to work, we’re suggesting a bone marrow transplant,’ you just think, ‘I don’t know what you’re talking about.’” Then, Sr. Jansen said, OHC began teaching her.

“They walked me through it: ‘this is what it means to get a bone marrow transplant, this will be the process and these will be some of the outcomes.’ It created a context I could step into. You’d walk away with some understanding, and understanding is freeing.”

When you’re in the context of survival, to know that there’s some dimension of freedom in there, that’s pretty rewarding.

Sr. Jansen’s faith, her caretaker, family, religious community, extended family at Ursuline, and the staff at OHC made all the difference in her attitude and recovery.

At Ursuline, staff and students let her know how much she is loved. Known as “SMAJ” (Sister Mary Ann Jansen) to students, she recalls stopping by the school unexpectedly and being greeted by applause in the hallways. “The girls — it was a blessing that I had such a community of support,” she said of their cards, phone calls, and texts.

The following Christmas, Sr. Jansen was able to visit the school, making an appearance in a surprise flash mob by the teachers. “At the end, out came the sleigh with Santa and me,” she said. “Thank God for that Santa hat, because I didn’t have any hair!” After the cheering died down, Sr. Jansen took the microphone and engaged the students in her familiar mantra.

To their surprise the Ursuline faculty decided to entertain the students with a holiday flash mob, which you can see here. The finale will bring tears to your eyes, as it did to over 850 students.

As the Christmas sleigh appeared, it carried their beloved Sr. Mary Ann Jansen (5 months after her transplant) and Ursuline chaplain Fr. Jack Wessling dressed as Santa. The students were aware of her serious illness but had no idea she would appear during this event. The cheers and tears could be heard throughout the hallways that day. Ending this very special event was SMAJ’s chant: “God is good! All the time!”